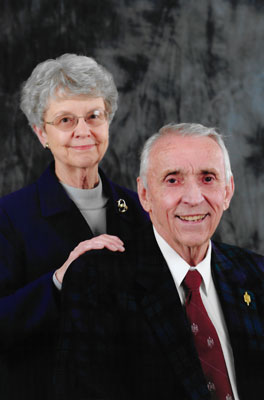 CWU alumni and donors Verna and Donald Duncan, both earned their bachelor’s and master’s degrees at Central (then Central Washington College of Education). Both were teachers, and know the importance of giving back and paying it forward.

“Central Washington University provided a wonderful opportunity for the awakening and enriching of my life through academic, musical, athletic, and social concerns,” said Don. “Those experiences provided a very strong foundation for the many successes I have enjoyed.”

While at CWU, Don participated in student government, serving as vice president for one term, earned a bachelor's degree in 1951, and earned a master's in education in 1955. Post graduation, Don remained involved at Central, serving as president of the CWU Alumni Association (1959-1961), dean of men and dean of students (1963-1965), and was a recipient of the Distinguished Alumni Award in 2002 and the Legacy Award in 2016.

“During most of my career in teaching and administration, I have been involved in bringing people together to explore issues, concepts, and problems,” Don continued. “I hope that our scholarship will support and encourage students to grow in leadership and scholarship and that will provide the desire to leave a similar, meaningful gift for others.”

Verna attended Central (then CWCE) as a student, earning a bachelor’s degree in 1953 and a master’s degree in 1955. She grew up in Yakima, where she started playing the flute in Fifth Grade, taking part in music contests at Central every year thereafter, as well as other Pacific Northwest competitions. She was a dedicated elementary school teacher for 23 years.

She says, “Receiving a music scholarship, in addition to others, made a significant difference in my ability to attend college.”

“Since retiring from teaching, I have been the principal flutist in the Salem (Oregon) Pops Orchestra for 16 years. Music has been an important part of my life and my husband’s,” she continued. “It is my hope that in the future, students will go on to be successful and come back to contribute a meaningful gift to students to help perpetuate the legacy of a fine education that CWU offers.”

The Duncans encourage others to consider leaving a lasting legacy for future CWU students through an estate or planned gift.

Back to all stories